Our chip run was led by Jeff and saw us head north of Meidrim on minor roads towards our destination of Taten Eirw, the chip shop, at Blaenporth. A hardy bunch of 7 cars assembled at our usual starting point in the Co-op car park on a cloudy afternoon with a bit of rain about during the run. On quiet minor roads we headed north from Meidrim towards Trelech through rolling hills and wooded valleys. At some point beyond Trelech our convoy was “split” by a slow moving milk tanker and as a consequence the rear half of the convoy took an alternative route to our destination whilst the “front runners” went on to Star, Bwlchygroes and Boncath to join the A478 and on to Cardigan. With perfect timing both groups of cars arrived at Taten Eirw at the same time and all enjoyed another very good “al fresco” meal before the return run over The Preselis and home. 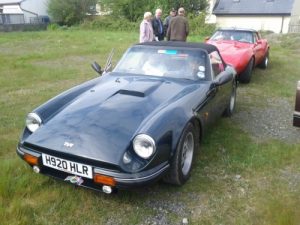 Want to join us?

If you’d like to become a member, please visit our Membership Page